As you might expect, this lovely video was shot by my favourite video artist, John Parsons.

He photographed these beautiful Water-Shields (also called Dollar Bonnets) on Black lake in late August of this year. The plant’s real name is Brasenia schreberi. It is native to North America. Its long leaf stalks reach all the way to the bottom where they attach to a long creeping root that is anchored in the mud.

It is quite common in Laurentian lakes. A 2016-17 survey of aquatic plants in 46 lakes which included Clear and Curran found that it was the 2nd most common aquatic plant in the lakes of Argenteuil that were surveyed.

Interestingly, and to the surprise of the residents of the eastern bay of black lake there were much less Purple Bladderwort than in previous years, maybe up to 80 % less. This even though it was assumed that low water levels would encourage the growth and spread of the plant. And, as you know, water levels were very low last summer on all of our lakes since we had little rain. There is a theory that just went out of the window!

Another phenomenon worth mentioning is the very low number of beavers sighted in and around our lakes during the summer. Why? A plausible explanation is that the creeks that they use to reach our lakes were exceptionally dry. Since beavers are basically aquatic animals, their pathways to our lakes were not inviting.

Back to lake Curran

The report by CRE Laurentides that I alluded to earlier identified 18 species of aquatic plants on lake Curran. All native.

Many of you will recall that this survey of Curran lake aquatic plants was done in August of  2017 was well organized by Sheryl Jackson who mobilized a large group of volunteers. 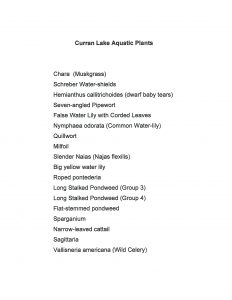 The survey also showed that plant density on the lake was very low as on Clear lake. This map is eloquent. (click both images to enlarge) 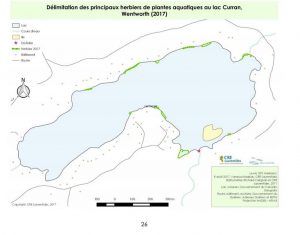 If  you wish to read the whole report – 17 pages plus annexes – all in French, click on this link.

Your comments and observations are most welcome.

9 thoughts on “A Fitting Salute to a Beautiful Dunany Summer: Water-Shields Galore!”