No less than  160 persons attended the great DCA Gala Dinner on July 20th. It was a roaring success. MC Maurice Pilon was as witty as a stand-up comic and made this event an evening to remember. Look at the smiles on this picture. Here is our new President Robert Percy with the evening’s Honoris Meritas recipients: Taras and Mary Chuprun, Jim Armstrong, Revilla Sauvé and Maurice. 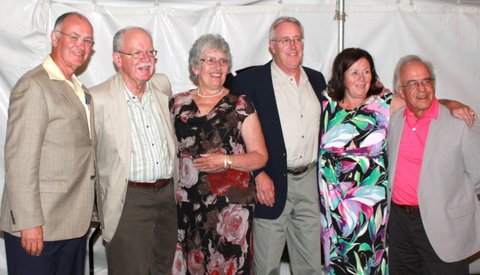 The event was attended by the Mayors of Wentworth -Ed Kasprzyk –  and Gore – Scott Pearce – as well as the Executive Director of the MRC d’Argenteuil, Marc Carrièere. An important presence was also that of Jill Marshall, daughter of the DCA’s first president, Wels Marshall.

Since the AGM was held at the same time, the proposed Board, led by Robert Percy, was voted in unanimously.

Lots of pictures were taken during the event. You will find them under a new tab, right under Pictures of Dunany. Click on one of the pictures then  use the arrows at the bottom to go to the next picture. If you are viewing this with an iPad, just swipe your way through.

2 thoughts on “DCA celebrates 50 Years, its pionneers and volunteers”