When you arrive in Dunany from Lachute, your eyes are directed to St. Paul’s Church. Just opposite lies Dr. Louis Lapierre’s Dunany residence.

Dr Lapierre passed away earlier this month at the age of 85. 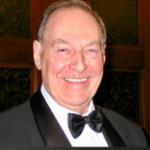 He was an  internist and a  nephrologist (kidney specialist) .  For more than a decade he headed the department of medicine at l’Hôpital Notre-Dame de Montréal, now le Centre hopitalier universitraire de Montréal (CHUM). He also taught medicine at l’Université de Montréal.

He arrived in Dunany in 1972 when he bought the 85 acre property from Grattan Thompson who had built a farm there. His grand daughter Lyn Bartram wrote to me a couple of summers ago wanting to know if there was still a farm there!

This is a picture of Dr Lapierre’s property as seen from the lake that I took for Lyn.

But here in Dunany, we will remember Louis Lapierre the generous man. He made the expansion of the cemetery possible by granting the Church the necessary land.

Many of us knew him well and enjoyed his company. Witness this first SPANK departure (2009) from his property then lead by Revilla Sauvé.

This is our final salute to you, Louis Lapierre our friend.