Dunany has lost a great lady!

Geraldine Carpenter Palmer – Gerry for those who knew her – passed away peacefully in Ottawa last week at age 96.

At 18, Gerry emigrated from England to Montreal where she taught herself photography, opened a Studio (bottom left) and became a full time news photographer. She was the only female photographer to be officially accredited to photograph both the first and second Quebec conferences in 1943 and 1944 (see picture with MacKenzie King, Roosevelt and Churchill below)) where the allies planned the freeing of Europe.

She also photographed Katherine Hepburn (top right) who was pitching War Bonds. She took the picture of Clear Lake covered with black ice in 1997.

She married Edward Henry (Peter) Palmer, a Mechanical Engineer (McGill), in 1953  and the following year bought a cottage on Clear Lake in Dunany. She said as soon as they drove up the road she knew it was the one – it had a huge “English Country Garden” – she didn’t need to go into the house! They sold their home in Montreal West and moved to the country permanently in 1966, a place and community that they both loved and would enjoy together for the next 50 years. 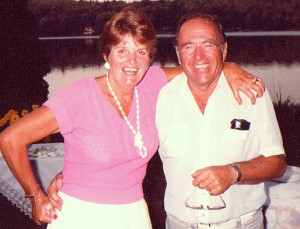 Gerry was an active gardener. As the children grew up, she took up golf and curling, sports Peter enjoyed. She was Ladies’ President of the local Dunany Country Club for 4 years, and a significant force in the Laurentian Interclub. She got a hole in one at the age of 79 and was embarrassed because she used her driver! In curling, she went to the Provincial Championships.

The Palmers have made an enormous contribution to the development of our great community through the Dunany Community Association of which Peter was the president from 1971 to 1973 and the Dunany Country Club which is now presided by their daughter Lynn.

I am sure the whole community joins me in offering it’s most sincere condolences to Lynn, Tom, Robin, Peter and the whole family. A celebration of her life will be held next summer in Dunany.

In her remembrance, donations to the Dunany Country Club – Centennial Fund would be appreciated. You can make them electronically by clicking here or  by check to Dunany Country Club, c/o Diana Minty, 2053 DunanyRoad, Wentworth, QC J8H 0B5