The MRC of Argenteuil recently published a map (pictured) showing where it would deploy it’s fibre cables to provide high speed internet to some communities not currently served in it’s northern areas.

It looked as though Dunany had been forgotten. So, I inquired.

Fortunately, it is the opposite. 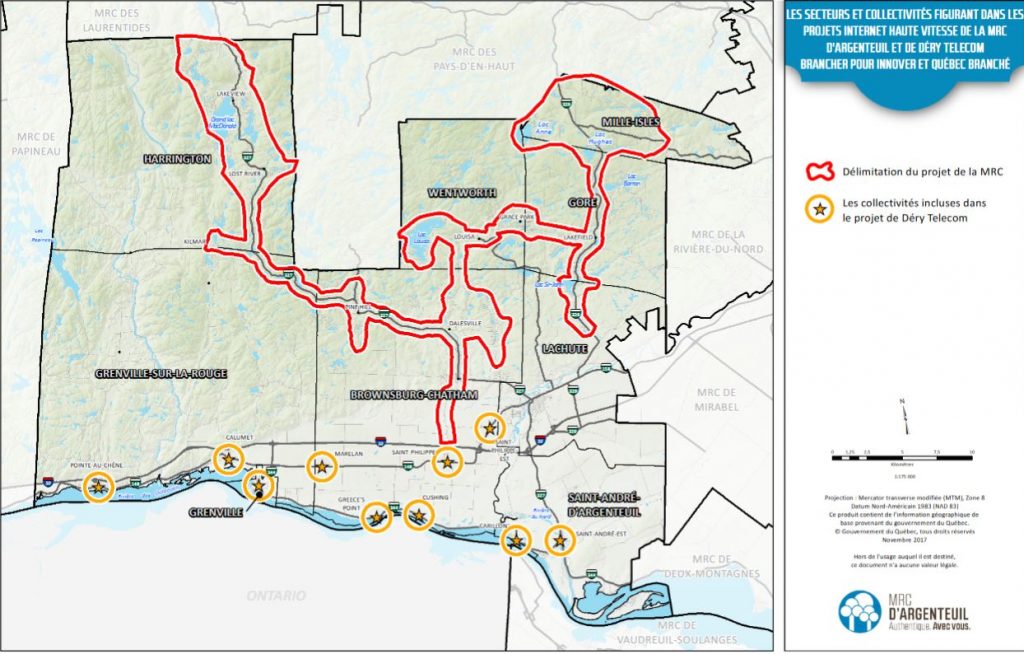 I have learned that there are two projects in store for Dunany.

The first project is a fibre link from Wentworth’s Town Hall to the end of Curran Road. High Speed Internet should thus be available to Curran Road residents by the end of March 2018.

At present, residents of Clear, Black, Boyd and those of Neil Road on Curran, are served by Bell’s 5 Mbit DSL service. Not so for the 45 residents along Curran Road.

The cost of bringing the fibre link to the end of Curran Road is estimated at 132,000$. A grant from the FDT program of the Quebec Government has already been awarded.  According to Jason Morrison, the new mayor of Wentworth who kindly supplied me with the information for this Post, this Dunany project will serve as the pilot project for the larger 11M$ (3 year)  MRC project.

The work on the Curran Road project must therefore be completed before the end of March 2018 as it will be a trial run for  the non-profit that the MRC is setting up. It will help determine how deployment, billing and product service should best be done.

The second project would be a partnership between Wentworth and Gore to deploy the fibre link along Dunany road as far as Stephenson. Estimated cost: 125,000$.

This fibre optic link would make possible much higher internet speeds than the 5 Mbits currently provided by Bell with it’s DSL offering.  As some residents of Clear and Boyd lakes are in Lachute and Brownsburg Chatham, these municipalities will be asked to participate in the project.

The MRC project shown in the map was designed to cover those areas that are not currently serviced such as Louisa, Grace Park and Pine Hill, where the only way to access the internet is through a satellite service such as Xplornet. Since most Dunany residents have had access to High Speed Internet since November 2011, it does not appear on the map.

But we have certainly not been forgotten. We will be the first to benefit with the Curran Road project and that project will lead the way for the whole MRC initiative.

Yes, Mary, there is a Santa Claus!