This is the official map of our watershed as produced by the MRC of Argenteuil. 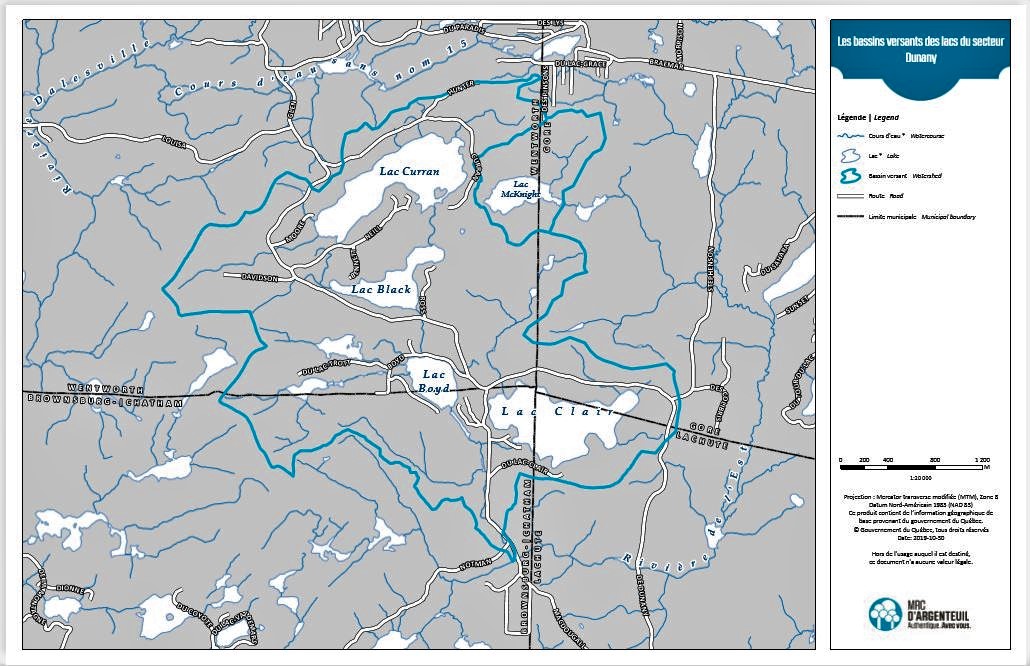 It is important for us as Dunany is defined by its watershed. Some residents here tried a couple of times to make Dunany a municipality. First time was in 1942. Winter population was 33, summer 140. Even though it had a School Board since July 1894 and a Post Office (opened in 1853), the request went nowhere. Second try (read the letter from Pierre Laporte then minister of Municipal Affairs) was in 1964 with the same result.

So, Dunany remains our hamlet.

A watershed is technically defined as an area of land where all the surface water drains into the same place, whether it’s a creek, a stream, a river or an ocean. Therefore, all precipitation, such as rain or snow, that falls on a watershed ends up flowing to the same place.

This is a cut-out from the map. 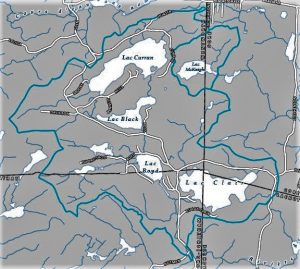 You will notice that lake McKnight is cut out from our watershed. That is because it is not part of it even if it sits at the same altitude as Black (265.9 metres). Since a ridge separates them, they do not connect.

Also, our four lakes – Curran, Black, Boyd and Clear – drain on a North-South axis as McKnight drains eastward. They both end up in the East river at different junctions and, later, in the North River.

Helping to protect the habitats of our birds.

Since habitat loss is the major cause of declines in bird populations across North America (and Argenteuil is no exception), the only way to increase bird populations is to provide them with more and better quality habitats.  DOA therefore hopes that Argenteuil will become a pioneer and an example to other MRCs and municipalities in Quebec by rehabilitating sites that have been destroyed or degraded by human activity.

For example, sites such as former golf courses, wetlands that have been drained or destroyed, old quarries, sand pits or gravel pits, cut forest areas, various wastelands and many other degraded sites can be rehabilitated to attract birds.  Whether private or public, very small areas (0.1 ha) or very large areas (several or even hundreds of hectares), whether these sites are terrestrial or wet, forested or agricultural, DOA is interested in knowing all the areas in Argenteuil in order to evaluate them for its program.

Once the assessments are completed, DOA will be able to identify the development opportunities that some of these sites could offer, with the cooperation of the owners.

You can contact DOA at the email address info.doa@videotron.ca to inform them of potential sites for their program or any questions you may have related to this program.

Thank you for your contribution.

2 thoughts on “Look at the official map of our watershed and find out how you can help protect our birds.”