Early last May a new loon platform was installed on Curran Lake. The old one was sinking fast and it was hoped that the loons would like their new nesting place.

The 5 minute video that follows was shot by the man who installed it. He is Martin Picard, a biologist, crazy about birds, executive director of Développement Ornitologique d’Argenteuil.

After the end of the first minute, watch the loon jump on the platform!

It is now under the tender loving care of Diane and David Glionna who are protecting the loons as if they were their children!

It was hoped that the eggs would hatch. Well, at least one did as you can see in the lovely picture that follows. It was taken by Diane Gliona on June 30. 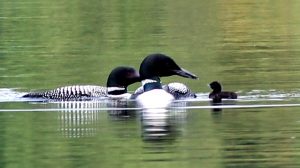 As most of you will recall, a platform was also installed on Black Lake in 2017. It usually takes a few years before loons decide to make it their hatching place. Maurice and Jane Pilon report that loons have been seen visiting around the platform.

Let us hope they will adopt this new home.

This love of loons and birds in Dunany has led us to become a corporate member of Développement Ornitologique Argenteuil which means you are all members.  DOA’s mission is to develop and protect bird habitats in our environment. It  is also supported by your municipality and the MRC.

It also has a Facebook page dedicated to its activities. More about this later this summer.