Terry Chuprun’s life came to an abrupt end the last week end of October when he suffered a massive brain hemorrhage. Most people in Dunany knew this generous man. They had either gone to his exercise classes, his dancing lessons, got a picture he had taken of them or a a woodworking piece he had crafted.

For Terry was all these things. A physical education teacher, an athlete (see black and white pictures below), a dancer, a photographer, a craftsman and most of all a great father and a caring husband.

He and Mary bought their Curran Lake cottage in 1996. It needed major renovations and Terry did most of them himself and crafted many accessories for the house. Wood crafting was one of his passions – he also loved poker and bridge – which produced all kinds of objects, from toys and puzzles to funeral urns.

Terry,  the physical education teacher was very active during the last decade giving Vie Active classes for the not-so-young every Monday and Thursday in two locations: either in Wentworth or Gore and in Lachute. This exceptional contribution to the quality of life of residents of Argenteuil was officially recognized by both the Wentworth Township and the MRC. His last class, which I attended, was on October 25.

Tara’s grand parents emigrated from Bukovina, an area that straddles Ukraine and Roumania and was raised as an Orthodox. He had deep affection for all things Ukrainian and duly celebrated every year the Orthodox Christmas (Sunday January 7 in 2018) with typical Ukrainian dishes.

When he suddenly collapsed on October 28, he was taken to l’hôpital d’Argenteuil in Lachute where they found he had a massive brain hemorrhage. He was later transferred to St-Jérôme as he was still breathing. His final gift to his peers was giving  away his organs which was done at Sacré-Cœur in Montreal. Today, a Canadian has a future thanks to the successful transplant of his lungs.

Needless to say, he would encourage all of us to sign our medicare card to make our organs available if fate would put us in a situation where organ giving was possible. If you do so, do share this information with those you love. 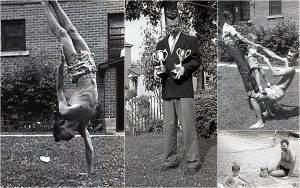 This post ends on a positive note. A lot is said and written about our so-called troubles health system. During this deeply emotional and traumatic event, his family only found professionalism and constant empathy from all those involved in the three hospitals: doctors, nurses and support staff. Same goes for the 911 people  and paramedics who took him promptly to the hospital.

Again, the funeral service will be held Saturday, November 11 at 2 PM at the Lachute Presbyterian Church, 463 rue Principale. Family will receive condolences at the church from noon to the time of service. Follow this link to view the orbituary.