The weather was good; spirits were high and the results were impressive. Fifty-four participants competed in the first ever Dunany Triathlon, supported by a host of volunteers. Thanks to the Burks, especially Dianne, who put their hearths into this and made it such a great success. 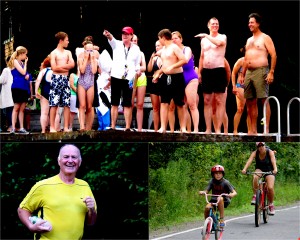 The day began with a swim across Curran Lake, followed by a cycle up “The Glen” and finished with a run around the lake. Participants challenged themselves with the “Try a Tri” or “Sprint” distances or their own personal goal. The day ended with a BBQ to celebrate not only our athletic achievements but also the fund raising effort towards building a school in Ethiopia.

As Dianne wrote, we built up ourselves through this community event, we also helped transform another community – creating new opportunities for 400 students!

7 thoughts on “The First Dunany Triathlon: an Event to Remember”