The initial test project on Curran Road was scheduled for March 2018. Yes 2018. But it got tangled in Bell’s telephone poles. Not that Bell owns them. They belong to Hydro Québec. But Bell has a right of first refusal that they acquired long ago. And they have used it constantly with exorbitant requests to compromise Fibre projects from MRC’s not just in Dunany but all around Québec.

One of them – the MRC d’Autray, just  east of Montreal,  which has a project pretty similar to ours went public last week and explained how Bell has built the obstacle course. If you are curious, watch this short news clip from Radio-Canada Télé. It is very instructive.

There is so much frustration that a bunch of MRC’s has lodged complaints to the CRTC. Hopefully, they will act swiftly.

But the MRC d’Argenteuil is not giving up. Far from that. It has set up the non profit corporation that will manage the deployment of the fibre on 280 kilometres along roads in the MRC. It is called Fibre Argenteuil. The names of the board members will soon be announced but I can already  tell you that one of them is from Dunany. 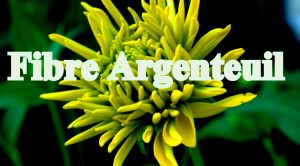 The first test, as I mentioned earlier, is the deployment on Curran road. I am being told that, thanks to some support from Hydro-Quebec, most of the obstacles have now been overcome, and that these Dunany residents can expect access to 50Mbits High Speed Internet this spring.

The pilot project will be the deployment of Fibre on the 17 kilometres of Dunany road from Wentworth City Hall to the North River and its branches. Since the planning is just beginning I doubt that this will happen this year. But even for those like me who now have access to Bell’s DSL (5 Mbits sometimes) switching to Fibre Argenteuil with speeds ten times faster at about the same price should be a no brainer.

Moreover, Bell’s DSL witch runs on old copper wires is not reliable. Interruptions are frequent and speed varies constantly. Last year, a bunch of us lodged numerous complaints to both Bell and the Commission for Complaints for Telecom-Television Service (CCTS).

In it’s report, Bell  basically said that the problem cannot be really solved because the infrastructure is too old and needs to be replaced.

It took a lot of energy to convince Bell that the problem was not in our homes but on their old fractured wires on the Hydro Québec poles. They eventually sent their wiring teams and worked on the poles for days on. The service is a bit better now but we still have many interruptions. Thank God WordPress saves my work continuously.

So I guess we will have to be patient, pray a little and hope Bell really gets out of the way.

9 thoughts on “When is Fibre Argenteuil coming our way?”