Who first developped Argenteuil? THe French? The British? The Americans?

The man charged with this mission was Charles-Joseph d’Ailleboust des Museaux owner of a Burgundy castle in Argenteuil-sur-Armaçon,  a bodyguard and nephew of Louis XIV, king of France. In 1680, he was awarded the Seigniory of Argenteuil, a territory of 54 000 acres located between the Ottawa and North Rivers which he was supposed to develop. He never set foot there. His son Pierre bought it from him in 1697 but it is his wife Marie-Louise who built the first Seigniorial manor. By 1740, only five French families inhabited the territory.

Early in that century, the French had allied with the local tribes: Algonquinians, Micmacs, Hurons, most of whom were gradually exterminated by the ferocious Mohawks. Peace only came to New France after the French and their allied indian tribes signed La Grande Paix de Montreal with the Mohawks in 1701. 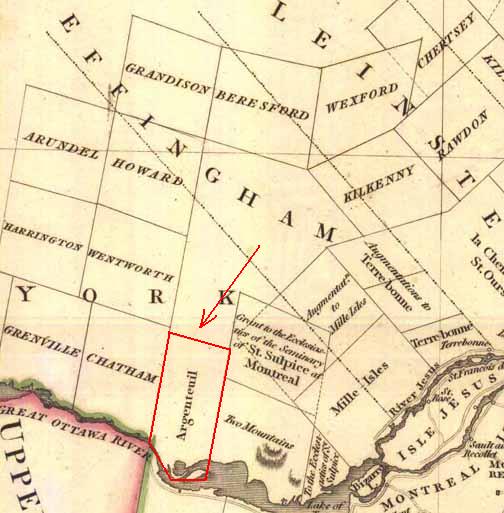 Bottom line: it wasn’t the French.

The Seigniory changed hands many times until it’s purchase in 1793  by Major Patrick Murray, a commander of Fort Detroit and then by James Murray in 1803 and then again by Sir John Johnson who encouraged the American Loyalists to move in. Thus Massachusetts citizens, mostly of Scottish descent, loyal to the defeated British in the United States began development in St. Andrews where they built the first paper mill in Canada. Then came Carillon and Lachute.

The Americans were followed by immigrants from the UK , mostly Scottish and, later, Irish. They became the nucleus of development in the Seigniory of Argenteuil. In 1854, the Province of Quebec, officially abolished the Seigniorial Regime and replaced it with counties.

So, the real developers were Americans.

The Seigniory is long gone but the Comte d’Argenteuil is alive and well in France. He name is Alain Chebroux an he hosts an excellent web site (in English, if you please) that you might want to look it if you want to know more. Needless to say, he is my main source of information.