This is a first in Québec. A property owner by lac Ouareau, in Lanaudière – near St-Donat – built a large house on a lake-front lot and decided to clean cut and level his shoreline even though the municipality, Notre-Dame-de-la-Merci (pop: 1100), had previously informed him of its 1996 by-law forbidding such action in the 10-15 meter lake protection band. The by-law is basically the same as Argenteuil’s. 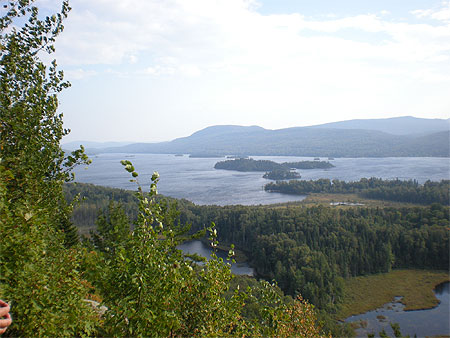 The municipality sued, won and even got the defendant to pay its legal costs (30,000$) . Moreover, the owner of the mansion – the property is valued at 1,090,800.00 dollars- will have to restore the shoreline along the plans drafted by consultants hired by the municipality. If he fails to do so, the deciding judge from the Superior Court, Justice  Steve J. Remnitz, authorizes the municipality to do the work and bill the owner as if it were a tax bill.

The municipality of Notre-Dame-de-la-Merci has worked hard in the past years to improve the quality of the water of its lake which has had many blue-green algae episodes in the past years, including 2010. For example, it has planted more than 1000 trees on its shoreline every year.

In his decision, justice Reimnitz took into account the fact that the municipality of Notre-Dame-de-la-Merci has a population of only 1100, a tight 2.6M$ budget and can hardly afford these legal costs. Now, that should be of great interest to our local mayors and councillors who are often hesitant to sue residents who do not respect their by-laws, especially the wealthy ones.

If you want to read Justice Reimnitz’s decision (in French) click on this sentence.