Thanksgiving was a great day to do some fish stocking! Sunny with glorious colours but cool. Water temperature at 12 degrees, uncomfortable for us (euphemism) but perfect for trout. 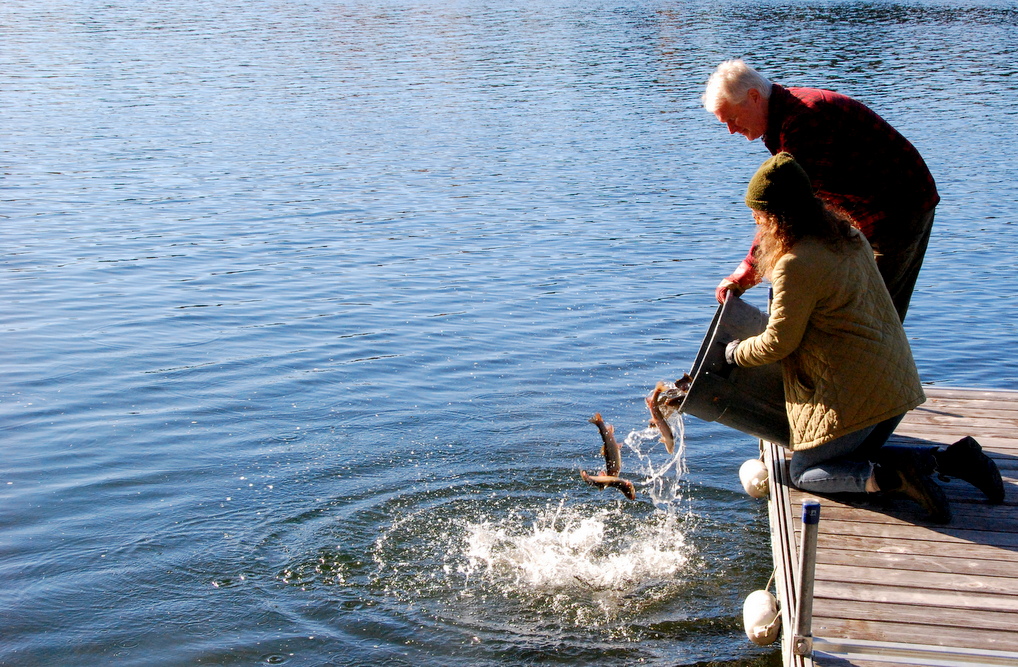 La Pisciculture Mont-Tremblant delivered 714 trout. 535 speckled (9 to 12 inches) and 179 same sized rainbow trouts which all went into Boyd Lake with generous help provided by Jim Armstrong  and Robert Taylor. 350 speckled were for Clear lake which still has native speckled which is why it it solely stocked with that species. The three other lakes are thus stoked with rainbow trout which have adapted very well to our environment. 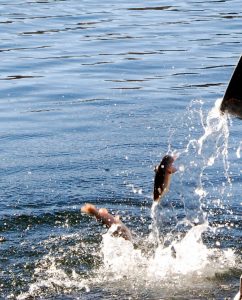 This program is ably managed by our Fisherman in Chief, Rod Armstrong, who has provided me with the information for this post. Some restocking of our lakes has been going on for at least 25 years funded by residents and fishermen aroun our lakes. In 2008, the DCA took over that responsibility and decided to entrust it to Rod. Current policy is to stock two lakes  every year, as long as funds are available.

Our Fisherman in Chief strongly recommends fly fishing for trout.  Using this method, the hook, with or without barbs, is rarely ingested more than an inch into the trout’s mouth and can thus be safely removed  permitting the release of the fish. He reports that his fly fishing group has successfully released thousands of speckled trout, with hooks only in the lip or jaw.

Hence his motto:  “Keep one trout for the table and release all others that are healthy enough to be released”. 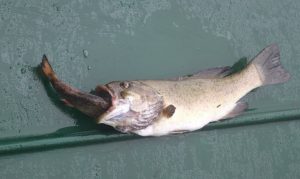 Bass feeding on a trout on Clear Lake with eyes bigger than it’s mouth. By John Wilson.

There are many other kinds of fish in our lakes, especially small mouth bass, which were introduced decades ago by who knows who and when. They are fun to catch and provide a good fight. They spawn in the spring and love to feed on trout, not always successfully as shown in this picture.

Try fly fishing next spring if you have not yet done so!