It has been a while since I reported about Dunany. There sure is more talk about Donald Trump than about our little issues. Still, here are a few tidbits!

As locals are aware, we had a wild January with ice storms, power outages, lots of rain and pretty awful road conditions with ruts and ice bumps that made driving hazardous especially on Dunany Road.  I contacted the guy in charge at the MTQ who got the contractor to grade it at the first thaw. 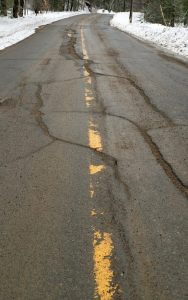 He knew Dunany Road pretty well and kept referring to it as ” une route de charrette “, which I will loosely translate as a horse and buggy road. A paved dirt road it is. There are many areas where water is flowing from surrounding properties. This run off, plus the absence of a proper infrastructure are the main reasons why the road is so hard to maintain when we have this kind of turbulent weather.

The only way to fix this is to reconfigure it. That is modify the path of the road. As you can well imagine, this is easier said than done. This is a big, expensive and disruptive initiative. I was told it was under consideration. But, who knows: will they go for it, just resurface it or patch it?

We should know in April when the 2017 road program is announced. I will keep you posted.

Beavers on our lakes.

Nothing generates more calls and emails than beavers. A beaver has cut one of my trees! A beaver is building a hut under my dock! Typical. Last summer, our trapper removed 14 beavers and took down no less than 10 dams. That is better than the previous year when 19 had to be removed.

This year, we will try hard to improve on that situation by starting work next month to remove as early as possible those animals that want to occupy our lakes. Especially Boyd which is their favourite playground. Lucky us on Clear, beavers don’t like our environment!

That being said, we will always have beavers. And are they ever resilient! You might have read the story of those 25 pairs of beavers that were imported from Manitoba in 1946 to the Chilean part of Patagonia for the benefit of hunters. They now number over 100,000 and are destroying that environment. Now the Chileans and Argentinians are trying to get rid of them with no success.

Talk about a self inflicted wound!

And now, our well travel cap.

“A very well traveled Dunany hat. Over 42,000 kilometers in 5 months to date. Today I thought I lost the hat. Forgot it in a Hanoi café, but they very nicely put it aside for me.
A funny thing happened at the coat check in Le Louvre museum in Paris back in November; I was wearing the hat and the friendly fellow who checked my bag said, in French, “Dunany! I know where that is.” He went on to describe that it was north of Lachute, and there was a golf course. When I asked him when he had been there, he said he found it on Google Earth, and thought it looked very nice. 21st century exploration. Pretty cool!”

I have a few caps left in my inventory, Jamie. Have a safe journey.

10 thoughts on “Our Road, our Beavers and our Well Travelled Cap.”