It happened so suddenly! A heart attack and a few minutes later, he was gone. 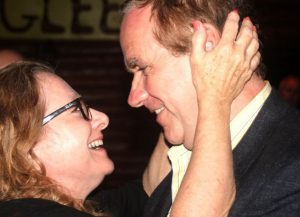 Also a gentle man, devoted to his community like his wife Cathy who is the life and spirit of the Dunany Glee Club. Ross was also the memory of Dunany. At every Dunany Country Club  AGM, as  head of the Honours Committee, he would not only describe the contribution of the persons being honoured but take this opportunity to remind members of the Club of their roots.

Ross was what is called a Line Producer – for the Frontier Series ( Netflix + Discovery Channel). His previous assignment was as Production Manager of seasons 2,3,4,5 & 6 of Republic of Doyle which was shot in Newfoundland where he spend so many months over those years and which he came to love.

Ross was also a regular participant in Dunany Community Association activities such as SPANK as shown in this picture where he really seems to enjoy himself.

All Dunany Community Association members extend their deepest and most sincere condolences to Cathy, his daughter  Lauren, family and friends. We will all miss him.

Please read the obituary as submitted by the family and write your messages on the funeral home’s website.

Ross was a wonderful man whose heart stretched from the city streets of Toronto to the Laurentian lakes and the cliffs of Newfoundland.

Ross was a Montrealer born and bred who lived and worked in the film and television industry in both Ontario and Newfoundland. After over 10 years in theatre, as an actor and tour manager he focused his talents in the film and television industry.  He was widely respected as a Line Producer/Production Manager on shows such as Republic of Doyle, Anne of Green Gables, Frontier, Caught, Little Dog and most recently, Star Trek Discovery. In this role he was a quick thinker with a broad view yet so good at in depth analysis.  He always worked with the lens of kindness balanced perfectly with bluntness. But this does not capture him. 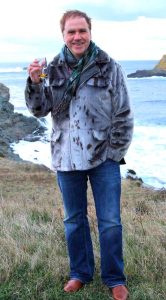 Ross was a foodie, a quilter, a theatre buff, a master martini maker, a hiker, a photographer, a historian, an actor and a golfer.  He collected friends like he collected art. Ross became friends with people immediately.  He did it by inviting them over for martinis and dinner, on a hike, or simply for a coffee.  If you were to name a few of his attributes, you’d say wise, kind, thoughtful, trustworthy, romantic, hilarious, but loyal and generous would top the list. He supported everyone in big ways and small. He gave often and with grace and ease.

Ross worked hard but also knew how to live well.  He was the guy who was given the best tables in the best restaurants and sat so that he was perfectly framed, by a window or door. He was the man who had impeccable taste in impossibly pointed shoes. He was the person who every bloody year replaced the art in his rental home in St. John’s with favourite pieces from his collection of local Newfoundland artists.  He hiked with a bottle of wine, ‘truffled’ cheese and real china in his backpack. He even has a sealskin coat named “The Ross” after him.

Most importantly, Ross was a family man, well raised by his parents who held family values high.  He spent idyllic childhood summers with them his brother, Trevor and sister, Sharon at their family cottage in Dunany. Dunany is the place that holds his heart.

Cathy and Lauren were the stars in his life.

When he talked about his daughter Lauren it was with such tremendous pride that people would get teary. Ross was many things to many people, but his biggest and most important role was as a father to Lauren. He was the quintessential ‘fun’ Dad. He loved to take her on ‘big explores’ in the woods at the cottage, loved to walk her around on the Dunany golf course before the age of 5 and demonstrated how to ‘host’ a multitude of parties. If Lauren had to choose which parent to go shopping with it, it would not be practical, thrifty Mom but extravagant Dad. He instilled in her his love for the theatre and the arts. She attended an arts school and has followed in her father’s footsteps in the film world and regularly sought his sage advice.

And when he spoke of his wife Cathy, it was with a “get a load of how good I got it” smile.  (He was right to do so, she’s the original kick-ass feminist) Married for almost 28 years, they loved to hike the trails of Newfoundland, cycle in Toronto, and enjoyed spending time at their cottage kayaking, swimming, golfing, and hosting dinner parties with family and friends. With Cathy retiring from teaching this June they were making plans to build a new home on the lake.

As one of his friends quipped, Ross was unique and stood out in a business filled with individuality.

Ross made an enormous difference in the lives he touched. That is the gift he had.”

“He was a man, take him for all in all, I shall not look upon his like again.”  Hamlet

If desired, in lieu of flowers please feel free to donate to the following charities that Ross held dear: