Good news. Dunany road will be resurfaced this year.

As we all know, this is no luxury. Witness this picture.The project (Number 20) is listed in the Quebec Department of Transport’s  2018-2020 Investment Plan. It is in the 1M$-5M$ category. I am being told it’s about 3M$ job. It is also expected that the Department of Transport will take this opportunity to install guard rails west of Black Lake and just before Curran Road.

This was a tough cold winter with icy roads and slippery driveways. But, this year Dunany Road was very well maintained thanks to a new contractor David Riddell Excavation/Transport from Morin Heights  who did an excellent job. But their contract has now expired and the MTQ will be calling  for tenders soon. I reached the guy in charge at the MTQ and told him that our community was very satisfied with it’s work and we hoped that he would be selected again. 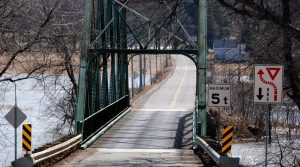 Another project of interest for us is the  renovation of the roadway of the Dunany Road bridge – often called Copeland bridge even though it’s official name is “le Pont Noir” – over the North River in Lachute. The project is within the 1 to 5M$ bracket and is also  to be realized this year.

Beavers have shown up very early this year. Would you believe late February. They were found cutting small trees by a driveway in the western section of Black lake. Our trapper had to set up traps and caught two of them before the month was over. 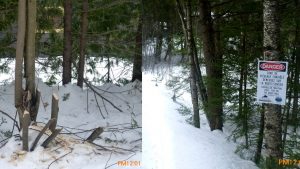 Throughout March, he will carefully review the situation on all our four lakes to locate any hut or beaver activity and remove them while the trapping season is still on. Hopefully, that will limit beaver activity during the summer season.

You all know that Eurasian Watermilfoil is our worst enemy. This invasive plant has done terrible damage to more than forty lakes in the Laurentians. I would ask to all those who rent their cottages to make sure that their lessors clean their boats before putting them in our lakes. Same goes for relatives and  friends.

I am taking this opportunity to remind renters that both Gore and Wentworth have a by-law which specifies that rentals should be for a minimum of 30 days. Those municipalities are going to be more and more vigilant in the application of this by-law which was enacted mainly to prevent rentals for week end noisy parties.

And now, time for spring to show up!