I received my first email through Fibre Argenteuil from a happy Louisa Road resident at 17:25 on Tuesday February 24. Mind you, this is a test but still, it is for real. I was told that 4 residents from this area had just been connected.

The following day, Wednesday February 25, I attended the Fibre Argenteuil information session at the Gore Community Centre. It was a full house. People standing in the back of the room. 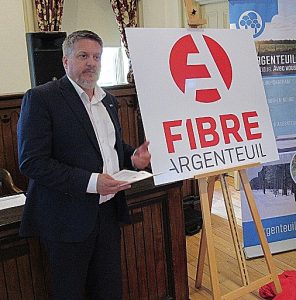 Mayors from Gore, Wentworth and Mille-Isles were there. So was Marc Carrière, DG of the MRC, with staffers Frédérick Jones and Stéphane Jourdain, the newly appointed Executive Director of Fibre Argenteuil Denis Huberdeau, and Chaiman of the Board Benoit St-Jacques of Black Lake, Chartered Accountant, Partner at FBL and the DCA’s esteemed treasurer. So, we are in good hands.

We need to. Dealing with Bell and it’s 5 000 telephone poles has proven to be a formidable obstacle course.

Before I tell you more about the project, I will answer the question most dunanyites are asking: WHEN?

Deployment to the 55 residents of Curran road: summer 2020.

Availability of Fibre Argenteuil for residents along Dunany Road and branches, spring 2021.

Fibre Argenteuil will offer speeds of 25, 50 and 100 Mbits. Bell’s DSL on Dunany road and some branches is a 5 Mbits service. Better than nothing but…

Telephony and television will be offered at a later stage.

These are the highlights of the fibre Argenteuil project:

I will do my best to answer your questions.

5 thoughts on “High Speed Internet throughout Argenteuil. There is progress. Be hopeful!”