Until June 2015 we, in Dunany, did not have an emblematic bird even if dozens of species are found our area . So I figured we should have one and that Dunany residents should select it. So I asked our ornithologist in chief Sylvie Robert to draw a short list. Timing was good as on Sunday May 17  2015 she participated in  Quebec’s Grand Défi Oiseaux. On that day, she and her partner Gilles Laperrière identified no less than 90 species of birdsin the Dunany area.

So here were her candidates: Pine Warbler (top left), Red-breasted Nuthatch (top right) , the Black-throated Blue Warbler (bottom left), Hermit Thrush (bottom right). Why? What were her criteria? These birds have a more prominent presence in our area than others. That is because they are especially appreciative of our mixed forests: conifers and leafy trees.

Here is a bit more information about each bird:

Pine Warbler:  This bird nests in the giant pine trees that so represent Dunany.   A bird that is quite rare elsewhere in Quebec, it is pretty common in Dunany.

Red-breasted Nuthatch:  A favorite of our bird feeders, this bird can even be taught to eat in your hand.

Black-throated Blue Warbler:  One of our most beautiful birds, anybody who has the opportunity to see it will appreciate its beauty.  A small bird with a big voice.  Its song can be heard all over Dunany from May to August.
Hermit Thrush:  How can anybody resists the song of the Hermit Thrush.  A beautiful fluting song that accompanies us all summer long. 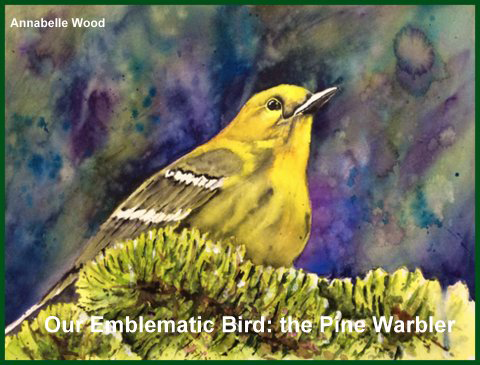 In the end, the declared winnen was the Pine Warbler.

But it was a close race. The Red-Breasted Nuthatch was a close second, followed by the Hermit Thrush. The Loon, the Black Throated Blue Warbler, the White-Throated Sparrow, the Black-Capped Chickadee and the Hummingbird also made the list.